Selling Shareholder Incentive in a Regulation A+ Offering

Selling Shareholder Incentive in a Regulation A+ Offering 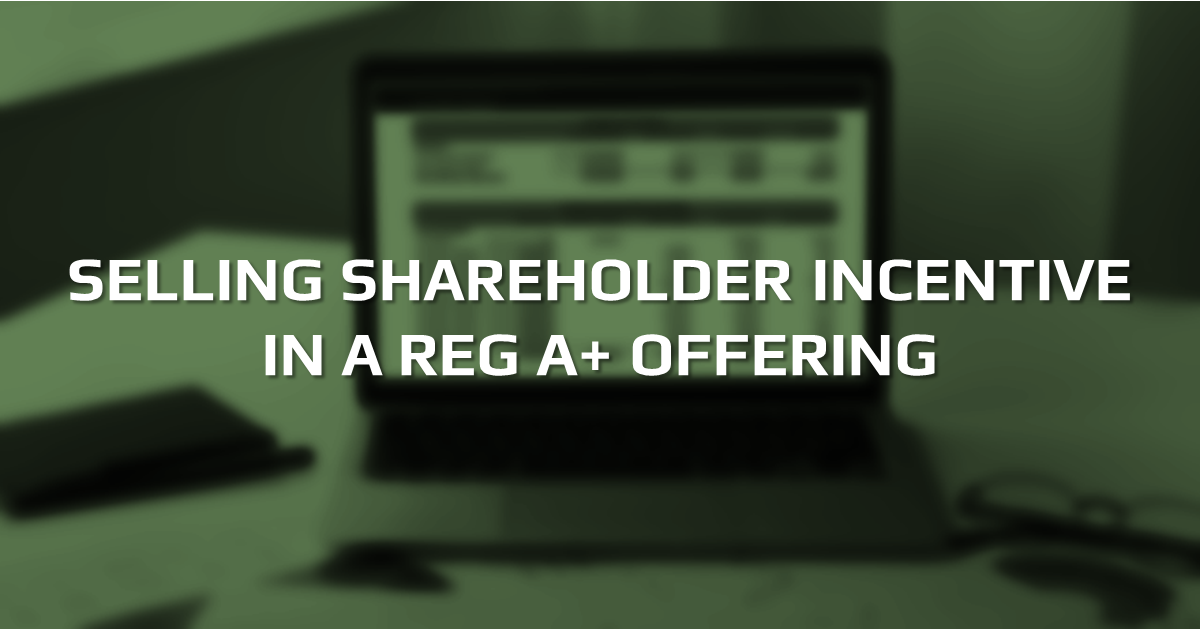 Growth in Reg A+ funding continues to accelerate as more and more companies realize they can raise capital faster, with less hassle, and at lower cost compared to traditional fundraising approaches.

Reg A+, which went into effect in 2015 as part of the JOBS Act, allows private companies to raise up to $75 million per year from the general public, something that was previously restricted to only the largest and most established companies.

Through 2020, Reg A+ offerings have raised more than $4 billion across 469 issuers – approximately $9 million per issuer on average – with nearly $1.5 billion raised in 2020 alone – a 42% year-over-year increase. And with over 200 Reg A+ offerings filed through early June, 2021 is on track to continue that growth trajectory.

You can read all about the advantages and benefits of Reg A+ here.

Many early-stage companies who would pursue Reg A+ lack the resources to market and promote their offering to a large investor base. For these companies, a scaled-down Reg D or Series A can serve as a crucial stepping-stone to Reg A+, providing the funds necessary to cover operating expenses in the interim as well as the costs to complete Reg A+ in the future.

Whereas in the past Reg D issuers could only solicit investors they knew personally, General Solicitation Rule 506(c) permits issuers to solicit any investor in Reg D provided he or she is accredited, significantly expanding the market of potential buyers in a liquidity event.

Generally speaking, an accredited investor is any individual meeting one of the following criteria: i) net worth in excess of $1 million; or ii) income in excess of $200,000 in each of the last two years ($300,000 if filing joint with spouse).

There’s simply never been a better time for early-stage companies to consider Reg D as a funding solution.

One of the biggest risks private company investors face is the lack of a liquid market for selling shares. Investments in private companies typically carry extended lock-up periods and the challenge of finding available buyers can result in significant decreases in market value when investors finally do sell.

In Reg A+, however, accredited investors who purchase securities in Reg D or Series A can sell a portion of their holdings, creating a powerful buy incentive given Reg A+’s strong liquidity and the likely step-up in valuation between capital events.

The law allows issuers to allocate up to 30% of their Reg A+ offering to selling shareholders. The actual amount investors can sell will depend on the issuing company, which sets its own policies as to how much of the offering will be allocated to share sales, as well as both the minimum and maximum amount of individual holdings authorized for sale. In general, the larger the raise relative to the issuer’s target, the greater the percentage allocated to selling shareholders.

Investors are under no obligation to sell stock in Reg A+, only if they choose. For those who participate, sales will be allocated on a pro-rata basis according to ownership, meaning each investor is granted the same sales allocation as a percentage of holdings.

While returns from stock sales in Reg A+ will depend on a variety of factors, our analysis of similar companies undergoing a Reg D or Series A prior to Reg A+ suggests that returns of up to 40% are realistic for Reg D investors who sell securities in Reg A+.

Let’s look at a case study demonstrating the shareholder allowance in action.

Company X decides to raise funds through a Reg D offering, raising $4 million in equity at $4/share. Later, in Reg A+, the company raises an additional $30 million at $5.80 per share, increasing the value of Reg D investors’ holdings to $5.8 million (45% increase).

Company X allows Reg D investors are to sell up to 30% of their holdings, now worth $5.8 per share representing $1.74 million in aggregate equity value. Assuming investors sell the full 30% in Reg A+, proceeds from sale generate a realized return on investment of 43.5% per Reg D investor.

Reg D investors maintain 70% of their holdings in Company X, now worth $265.5 million at the elevated Reg A+ valuation. The value of Reg D investors’ holdings post-sale is $4.06 million.

Valuation summary: Company X post-money valuation increases by the amount of the Reg A+ investment ($30 million) less the value of shares sold by selling investors.

ROI summary: The realized return to selling shareholders is computed as the value of sales proceeds divided by initial equity investment.

The table below illustrates how cash return from sales proceeds increases with share price in Reg A+: